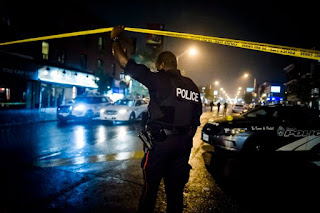 Global is reporting that "Peel Regional Police say a man is in life-threatening condition after a shooting inside a Mississauga hotel early Saturday. The shooting came just a few hours before another shooting in Peel Region early Saturday. Just before 5 a.m., a man was shot dead in an industrial area in Brampton." Earlier this month Global reported that another fatal shooting in Toronto was gang related. There were 11 shootings in Toronto over that long weekend, one of which sparked chaos as gunshots rang out in a packed nightclub.