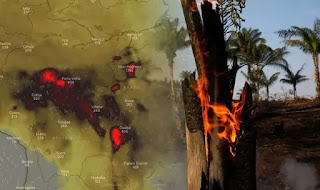 Global is reporting that "The Amazon rainforest, the vessel holding a massive amount of the world’s oxygen, is burning at a rate scientists have never seen before." Quartz is reporting that "The Amazon rainforest is burning at an unprecedented rate, and the fires are unlikely starting themselves. Rather they may be set by people in an attempt to clear land for cattle ranching."

The Express is reporting that "The increasing numbers of fires this year have been blamed on Brazilian President Jair Bolsonaro. Mr Bolsonaro took office in January and supported developing the Amazon region for farming and mining. This has proved controversial due to international concern over increased deforestation. The Brazilian President has also brushed off claims made by INPE. The space agency said the large number of wildfires could not be attributed to the dry season or natural phenomena alone. Researcher Alberto Setzer said: “There is nothing abnormal about the climate this year or the rainfall in the Amazon region, which is just a little below average. The dry season creates the favourable conditions for the use and spread of fire, but starting a fire is the work of humans, either deliberately or by accident.”