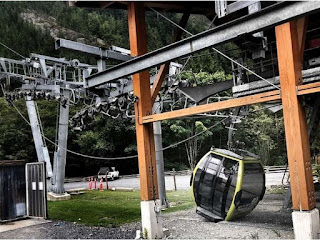 The Vancouver Sun is reporting that "RCMP said Saturday they believe someone may have intentionally cut a cable on the Sea to Sky Gondola in Squamish after gondolas crashed to the ground early in the morning, causing significant damage. No one was injured. RCMP say they are still assessing the damage but the early signs point to the cable being cut. Squamish RCMP Const. Ashley MacKay said authorities are inspecting the full length of the cable. The busy attraction was scheduled to open at 9:30 a.m. Saturday, but the company says that it will remain closed for the foreseeable future." WTF?

Sabotage? Who would do that? Why? How? Every crime has a means and motive. We go there all the time. The place is awesome. My daughter just showed me a picture on her phone from a friend of hers who was up there recently. The place was packed. More people up there than I have ever seen. I thought it must have been a concert or something.

CBC is reporting that "RCMP say they believe someone deliberately cut the cable of the Sea to Sky gondola located along Highway 99 in Squamish, B.C., felling the two-kilometre cable route early Saturday morning. Almost all of the 30 gondola cars attached to the cable crashed to the ground around 4 a.m. on Saturday. The gondola wasn't operating at the time."

4:00 AM the cable broke or was cut with no one on it. That is very strange.

Posted by Dennis Watson at 8:29 AM