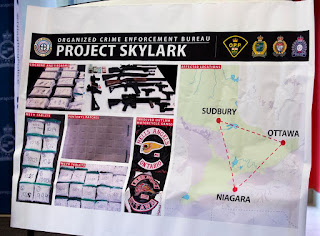 The Toronto Star is reporting that "The Hells Angels motorcycle gang used bikers in affiliated clubs to run a drug- and human-trafficking ring across the province, the OPP said Wednesday. 'They deal in multiple commodities,' OPP Supt. Bryan MacKillop, director of the force’s organized crime bureau, said at a news conference announcing the arrests of 15 people earlier this month in Niagara Falls, Sudbury and Ottawa." Organized crime bureau? Why doesn't BC have one?

"The arrests, part of a multi-jurisdictional police operation dubbed Project Skylark, resulted in 195 charges, including for the alleged trafficking of humans, fentanyl, cocaine and methamphetamine. The operation targeted the Hells Angels and the affiliate groups the Red Devils and the Hooligans, uncovering an alleged trafficking network working in a triangle between the Niagara Region, Ottawa and Sudbury, police said."

“Everyone should be absolutely furious that this is happening in Canada in 2019,” he said of the human-trafficking charges. Oh really? Then why the f*ck doesn't the Compromised BC Gang task force care about the human trafficking out of the Garden of Eden? Arnie is pulling drug addicts off the street giving them drugs and over taxing them for the red, white (and blue).

"Among those charged with a variety of drug trafficking offences are six people police describe as members of motorcycle gangs. They are: Joseph Piccinetti, 41, of Sudbury, and Joshua Khosrowkhani, 31, of Ottawa, whom police described as full members of the Hells Angels Nomads chapter; Keith Earle, 31, of Niagara Falls, Brandon Tupling, 33, of Orleans, and Jovin Degre-Blais, 34, of Ottawa, all of whom ware described as full members of the Red Devils Motorcycle Club; and David Nan, 21, of Sudbury, who was described as a prospect member of the Hooligans Motorcycle Club."

Don't miss the 2019 Kelowna Summer Jam now playing at a website near you.

How an ex cop became a pimp and drug dealer for the Kelowna Hells Angels. 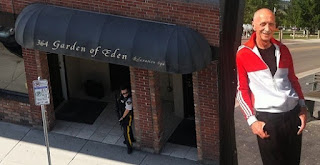