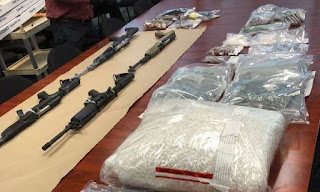 CBC is reporting that "On Aug. 6, officers raided a residence in the 16300 block of 14A Avenue where they discovered a large drug manufacturing operation they believe is connected to the crime group, Brothers Keepers. Some of the drugs were packaged in bulk and some were packaged for street level distribution. RCMP say preliminary testing indicates fentanyl was detected among the substances found."

Is this a joke? The Brothers Keeps sold drugs for the Hells Angels. Was this just a token bust of a few doses to take the heat off or are the Surrey RCMP trying to turn a new leaf right before they are disbanded? Will they bust the drugs coming out of Shakerz next or are they just targeting the Brothers Keepers because they refused to do the hit on Suminder Grewal? Please advise.

So it was the Surrey RCMP Drug Section that executed the search warrant. Both Surrey’s Gang Enforcement Team and the Federal Serious and Organized Crime Unit’s Clandestine Lab Enforcement and Response Team were also part of the raid. The Compromised BC Gang task force were nowhere to be found. Perhaps Kelowna should hire them to bust Arnie Miller. The former cop who pimps and sells drugs for the Kelowna Hells Angels out of the Garden of Eden. Letting him continue makes gang enforcement in BC a complete joke. Is the Surrey RCMP Drug Section going to bust the drugs coming out of Shakerz and the Dell bowling alley that supply King George in Whalley? Makes everything else they do look suspicious if they don't.