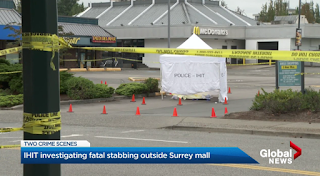 Global is reporting that "A man is dead in following an overnight stabbing near Surrey’s Semiahmoo Shopping Centre. Police said they were called to the 1700 block of 152 Street around 3 a.m, where they found a man suffering from grievous stab wounds."

The Peacearch News is reporting that "A 45-year-old man has been identified as the victim in Friday morning’s fatal stabbing in South Surrey. In a news release issued just after 11:30 p.m. Friday, Integrated Homicide Investigation Team officials said they were releasing Delphin Paul Prestbakmo’s name in an effort to determine his activities prior to his death."