3 BC Men charged with cocaine trafficking in Nova Scotia 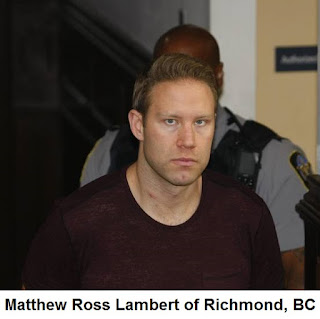 The Chronicle Herald reported that "Matthew Ross Lambert, 34, of Richmond was one of three men arrested in Halifax on June 9, when the Canada Border Services Agency hired a diver to inspect the hull of the Arica, a ship that was docked at the Halterm Container Terminal. The diver found about 150 kilograms of cocaine stashed in the container ship’s sea chest, a grated recess on the bottom of the vessel. Lambert and Darcy Peter Bailey, 46, of Fort Saint John, B.C., allegedly had diving equipment with them when they were apprehended by police near the terminal. Dangis Seinauskas, 46, of Ajax, Ont., was arrested a short time later at a hotel."