CTV is reporting that "Two men were rushed to hospital with serious injuries after being shot in the Fraser Heights neighbourhood, according to Surrey RCMP. The shooting took place near a school and two daycares in the area of 160 Street and 111 Avenue at 4:30 p.m. Tuesday." Lately the Hells Angels have been shooting rival drug dealers in Fraser Heights.

It would be interesting to see if the Brother's Keepers are still taking contracts for the Hells Angels after the Hells Angels killed Suminder Grewal. He was their contact in the Softside chapter. There is no L&R in the club. Only Greed and Betrayal. Suminder's debts were manifactured. They made it clear that they kicked out the brown member in Nanaimo. The Hells Angels are predominately racist. They will pay a brown guy to shoot a brown guy but they will never respect him for it. 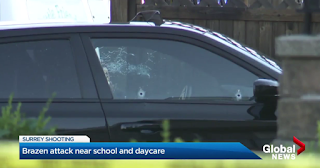