Police seize 1,000 kilos of cocaine in Montreal and southern Ontario 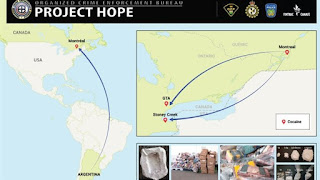 CBC is reporting that "Ontario Provincial Police have seized more than 1,000 kilograms of pure cocaine in what the force is describing as the "largest single drug seizure in OPP history." The seizure took place in the course of a multi-jurisdictional investigation that followed the cocaine from Argentina to the Port of Montreal, where it was sent to Ontario to be distributed."

"Police say various caches of cocaine were found at the Port of Montreal and in Stoney Creek, Ont. As a result, three Canadian men are facing charges of importation and possession with the purpose of trafficking. Luis Enrique Karim-Altamirano, Mauricio Antonio Medina-Gatica, and Oban Orozco-Lomeli, the three men facing charges, are all originally from the Greater Toronto Area."

May of this year, Luis Enrique Karim-Altamirano, 52, of Vaughan and Mauricio Antonio Medina-Gatica, 36, of Brampton were charged with importing cocaine and possession of cocaine for the purpose of trafficking after police caught them with 142 kilos in their car.