Whiterock RCMP wakes up and smells the coffee 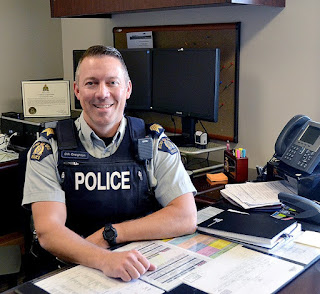 The Peace Arch News is reporting that " White Rock RCMP have a stern message for those who peddle drugs in the city. 'If you deal drugs in White Rock you are not welcome here. Prepare to be arrested. We will not tolerate the misery and pain you are bringing into the community,' White Rock RCMP Staff Sgt. Daryl Creighton said in an emailed statement Friday afternoon."

Finally someone with a brain!!! God Bless Daryl Creighton. Can we trade? Why is this so difficult to comprehend? Enforcement is one of the four pillars. If you throw away that crucial pillar you are both stupid and corrupt. As long as you let drug dealers sell drugs in public, organized crime will fight over those profits and addicts will steal to pay for the drugs. Crime will rise if you refuse to enforce the law. It's that simple.

In contrast Linda Airhead Hepner says if you are a gang member we will go after you for jaywalking but we wont touch you if you are selling crack on the Surrey Strip. Will someone please put that clown out of her misery? Go home. Let Eileen Mohan take over the party. If she wont do it Doug McCallum will. You are going to arrest a fringe associate for jay walking but you won't touch the drug trafficking coming out of Shakerz. You're the one that should be in jail.