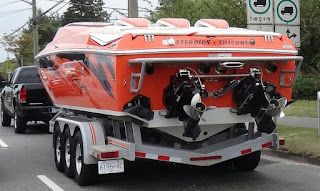 I'm not following the Kling Klung con but I will say this. Kim Bolan is reporting that "The day after the shooting, the witness said he was driving along Highway 97 in West Kelowna with Doug Wheeler when he saw James Riach and Matt Schrader in another car."

This new evidence is consistent with what I previously reported. The trial is about the famous shooting in Kelowna where Jonathan Bacon was killed, Larry Amero was wounded and James Riach escaped almost unscratched. When all the bullsh*t was flying fast and furious, I reported that Matt Schrader drove James Riach to Vancouver after the shooting and stored Larry's boat at his house. This new evidence confirms what I said was true.

Kim Bolan is also reporting that "Video surveillance footage played in court showed five people walking toward the Delta Grand from the direction of Rose’s Pub shortly before 2 a.m., the morning of the shooting, then back toward the pub shortly after 4 a.m. 'I was with Jones, McBride, Manny Hairan and Khun-Khun,' said a witness whose identity is protected by a publication ban."

"In another video from later on in the morning, at 4:22 a.m., three people are seen walking from the Delta Grand parkade toward the entrance of the hotel. 'I see myself, Manny and I believe that’s Khun-Khun,' said the witness. A couple of minutes later, three people are seen crossing Water Street toward Clement Avenue and walking down the sidewalk. 'I believe that’s me, Manny and Khun-Khun,' said the witness."

This also confirms what I previously reported was true. Kim previously reported that "In its opening address, the Crown said Schrader had told an associate of the accused that Amero and Riach were in Kelowna that weekend." The crowns own evidence proves that is a bold faced lie.

As I previously reported Matt causally mentioned to the police witness that he was just speaking with Larry and James at the Grand. He wasn't ratting anyone out because they were not in hiding. They were running around loud and proud on that stupid boat trying to pick a fight with civilians. The police informant is the one that did what he is falsely accusing Matt Schrader of doing.

The police are lying because they are pissed Schrader hasn't ratted out any of his former associates. They are fabricating false allegations against him to put his life in danger so he will flip and give them information on his former associates. Go f*ck yourselves. Matt Schrader has left the life and has a real job. Get a life and leave him alone. It's a good thing the court puts witness's statements to the test of believability. Too bad the media doesn't.

Update: Andrea Peacock is reporting that the case is still at the voir dire stage. I'm a bit confused. Evidence at a voir dire is normally under publication ban so why is everyone reporting on it? Likely that means they are not being tried by a jury since you are not allowed to report evidence submitted when the jury was not present. Yet David Giles wasn't tried by a jury and we couldn't report on his voir dire. No doubt he had a separate publication ban that was also in effect. Yet this whole attack on Schrader is suspicious as hell.