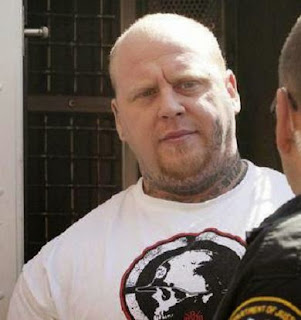 The Times Colonist is reporting that "Police in Halifax say three people, including a member of the Hells Angels motorcycle gang, face multiple drug and firearms-related charges following a search at a local home. A man police identify as a member of the Hells Angels, 35-year-old David James Bishop, is in custody and is scheduled to appear today in Dartmouth Provincial Court. Two women, 33-year-old Jacquelyne Anna Brophy and 28-year-old Sara Michelle Walker, were released and are to appear in court Aug. 30."

"The search was conducted Aug. 2 at a home on Pernix Court in the bedroom community of Cole Harbour. Police say they found a large quantity of drugs along with outlaw motorcycle gang-related paraphernalia, firearms and ammunition. The list of charges include trafficking in cocaine, ecstasy, and cannabis resin, and two counts of possession of a loaded restricted firearm."

Tell me he didn't pull a Rusty Hall to get his patch.