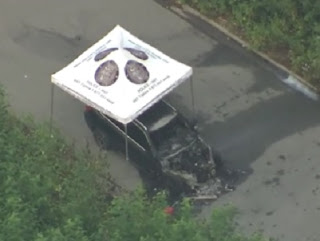 Global is reporting that "The Integrated Homicide Investigation Team (IHIT) has been called in to investigate after a body was found in a burned vehicle in Surrey Wednesday morning. Police were first called at 12:20 a.m. to the 18700-block of 24 Avenue to reports of a vehicle on fire. When they arrived, they found a body inside the burned SUV."

Update: Global is reporting that "The body found in a burned vehicle in Surrey Wednesday morning has been identified as a 19-year-old college student. The victim, Bhavkiran (Kiran) Dhesi, was last seen leaving her family home in Surrey on Tuesday at 9 p.m."

CBC is reporting that "After extinguishing the flames, police say they found injuries on her body consistent with a homicide. Investigators believe the student was killed in a different location before she was found inside the burned-out family car."

Citing a police press release the Surrey Now Leader is reporting that “Miss Dhesi was not known to police, and the investigation to date indicates that her death was not related to gang activity.” Sounds like another tragedy like Maple Batalia. A beautiful young girl is murdered in domestic violence. It's hard to conceive that kind of insanity can still exist in our age.