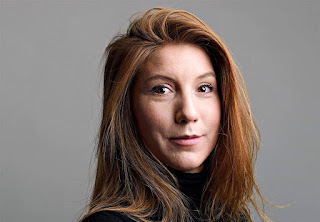 BBC is reporting that "A headless torso found in waters off Denmark has been identified as missing Swedish journalist Kim Wall, Danish police say. Ms Wall was last seen alive on 10 August as she departed on a submarine trip with inventor Peter Madsen. The submarine sank hours after the search for Ms Wall began, after her partner reported that she had not returned from the trip. Mr Madsen, who designed and built the submarine, was charged with negligent manslaughter. He initially said he had dropped her off safely near Copenhagen, but has since said she died in an accident and that he had "buried" her at sea."

The Independent is reporting that "The mother of Swedish journalist Kim Wall has told how her daughter "gave voice to the weak, vulnerable and marginalised" in an emotional tribute after police identified her remains."