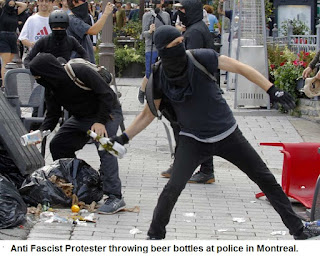 I understand that there were some clashes between racist and anti racist protesters in Quebec. The whole thing is a bit toxic. The anti capitalist protesters covered their faces and looked like anarchists. I didn't think you were suposed to cover your face at a protest any more. The anti right protesters were throwing beer bottles at police. The anarchists are no better than the Nazis. We need to shun extremism from all sides.

The Montreal Gazette is reporting that "Some of the counter-protesters began throwing bricks at a man named Éric Roy, who was carrying a Patriotes and a Quebec flag." The guy was not carrying a swastika, he was carrying a Fleur de lis for God's sake. I have concerns here. Anti Capitalists with masked faces throw bricks at a guy holding the Quebec flag and an old patriot fag representing unity between the French, Irish and English. He should not have been attacked for holding those flags. The anarchists were clearly in the wrong. What does the red flag represent? Are the anti fascist really Communists? One is no better than the other. We need to shun both. 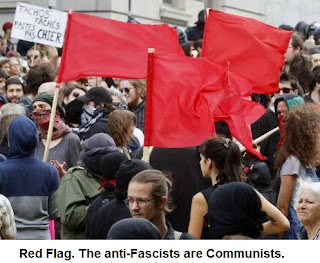 Quebec is facing a colossal amount of asylum seekers crossing the border illegally becasue of Donald's Trump's new immigration policies. Montreal's Olympic Stadium is being used to house the surge in asylum seekers. People have a right to express concerns about the amount of asylum seeks we admit. In fact that is an election issue right now in Quebec. That's why it concerns me when police rule the original protest illegal. As long as they aren't marching with swastikas or the KKK, they have a right to express their concerns.

As I previously reported, the surge in refugee applications has resulted due to Donald Trump's radical changes to their immigration policies revoking green Cards from thousands of people forcing them to leave with no place to go. Many of the asylum seekers in Quebec are from Haiti. Remember the big earthquake in Haiti we all felt compassion for? A lot of these people came to the United States after the earthquake and Donald Trump is now kicking them out. That is just plain nasty. We are talking about families with children. 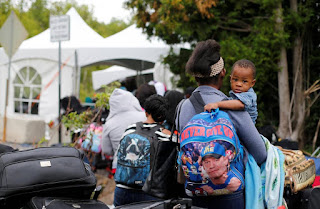 Why are they going to Quebec? Because they speech French. This is a golden opportunity for Quebec. Quebec wants to preserve their language. I get it. This is their chance. Oh we dont want them because they're not white? D'accord. Mon frere, let me explain something to you. When you travel around the world and see the world population, white people are the minority. That is reality. North America has been built by immigration. Everyone here came from somewhere else.

Trudeau thinks we can handle the surge in immigration. I agree with him. Immigration is exactly what Surrey needs. A few weeks ago I was getting a new tire put on my motorcycle and took a walk around the Surrey Strip. Right now Whalley is like the Bermuda Triangle. Everyone is walking around lost because of the open drug trafficking and abuse. Most of these addicts are white trash running around stealing everything that isn't nailed down to pay for more drugs.

Since businesses are leaving the crime zone a few ethnic shops have opened up because of the cheap rent. There are a few Arabic stores selling hijabs and Halal food along with a few traditional African grocery stores. As I'm walking down King George I see a few black men taking outside the African food store and I think to myself OK finally I'm going to see a black guy selling drugs instead of just more white trash. Wrong. They had hard hats and backpacks on and had just got off work. They actually had a job unlike the vast majority of white trash in that area.

Immigration is the best thing for Surrey. The solution is simple. Give them temporary work permits and let them work. We can't put them all on welfare but if they are willing to work have at it. If they commit a crime then deport them. It's that simple.

Statistically immigrants who come here are less likely to commit crime then those born here. The world is full of problems. We can't do everything but we can do something. Like a waving flag yo. Just make sure it's not a swastika or a hammer and sickle. Peace. 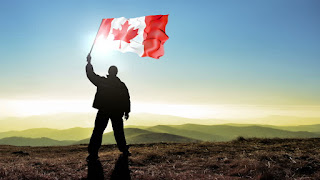 Aleksandr Solzhenitsyn explained that Lenin was not the leader of the Workers revolution in Russia, Shiplov was. Lenin hijacked the party from him. When the trade unions went on strike to complain he used live ammunition on them. Their families were too scared to collect their dead.

The book None Dare Call it Conspiracy explains the similarities between Hitler and Stalin. It states: "Like Columbus, we are faced with the task of convincing you that the world is not flat, as you have been led to believe all your life, but, instead, is round. We are going to present evidence that what you call "Communism" is not run from Moscow or Peking, but is an arm of a bigger conspiracy run from New York, London and Paris."

"The men at the apex of this movement are not Communists in the traditional sense of that term. They feel no loyalty to Moscow or Peking. They are loyal only to themselves and their undertaking. And these men certainly do not believe in the clap-trap pseudo-philosophy of Communism. They have no intention of dividing their wealth. Socialism is a philosophy which conspirators exploit, but in which only the naive believe. Just how finance capitalism is used as the anvil and Communism as the hammer to conquer the world will be explained in this book."

You say you want a revolution? Well as long as you're holding pictures of Chairman Mao you can count me out. The Beatles were right yo.