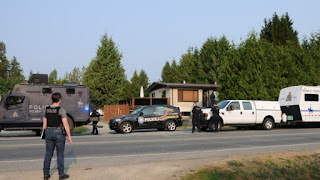 CBC is reporting that "B.C.'s anti-gang police unit raided a Campbell River motorcycle clubhouse Thursday morning as part of its investigation into the homicide last year of a Saanich mixed martial arts fighter. The Combined Forces Special Enforcement unit says it will remain on the scene at the Devils Army Outlaw Motorcycle Gang Clubhouse for several days gathering evidence relating to the discovery of John Dillon Brown's body in March of last year. The clubhouse is located at 70 Petersen Road in Campbell River."

The Devil's Rejects are a Hells Angels puppet club. Grown men calling themselves the Devil's Army. If they only had a brain. Rainbow Ricky and the crew had a gay pride parade for them last April at the Langford clubhouse. That's just plain stupid. Don't support idiots any more. 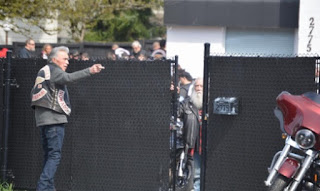 The Devil's Army clubhouse in Langford is subject to a court action with the city.