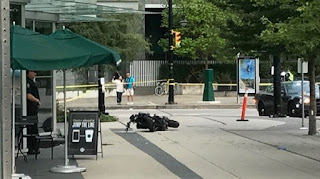 Tragically CBC is reporting that "A female stunt rider working on the Vancouver set of Deadpool 2 has died after losing control of her motorcycle. According to witnesses, the motorcycle crashed through the window of the Starbucks in Shaw Tower, near Jack Poole Plaza."

Global is reporting that "The rider successfully completed the stunt four times. However, during the fifth time, the throttle somehow engaged and that’s when the rider lost control of the bike." Tragically the stunt rider, Joi Harris was not wearing a helmet as per instructions from the set.