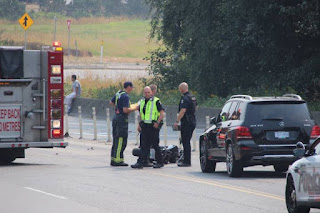 Global is reporting that Police are investigating a fatal motorcycle crash at the base of Nordel Way near Highway 91 in Delta on Wednesday afternoon. CTV News is reporting that "A male motorcyclist in his 50s is dead following a collision with an SUV in Delta Wednesday, police say."

"The crash occurred at about 2:20 p.m. in the 10500 block of Nordel Way near 112 Street. Delta investigators said in a statement they believe the SUV was travelling west, but crossed into the eastbound lanes and struck the motorcycle. The rider was pronounced dead at the scene. He has not been identified." Could have been me but it wasn't.

There are a lot of things you can do on a motorcycle to drive responsibly and defensively. In this case the SUV crossed over the centerline into oncoming traffic. There's not much you can do in that situation. It's like running a red light. Some things are just bigger than we are. RIP.