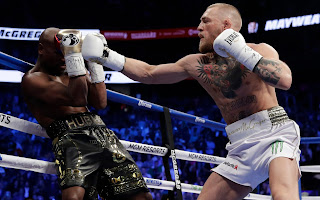 Live updates on the Mayweather vs McGregor fight. I'm surprised McGregor is lasting this long. In the UFC he would kick Mayweather's ass but in boxing there are so many rules and the ref breaks them apart every time they get in a clinch. Mayweather's had time to run away from him and tire him out first. Like the Muhammad Ali rope a dope.

Mayweather ran away from Pacquiao that whole fight. On Twitter Mayweather said talking doesn't win fights. Pacquiao stepped in and said but running does. The comment has been deleted so it may have been fake but is funny nonetheless. 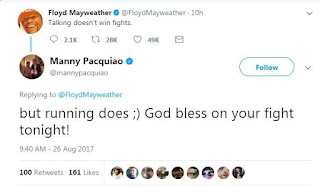 Mayweather wins by TKO in the 10th. That's a long haul. Now for a rematch in the cage. I will however say this: Hats off to Mayweather. The Muhammad Ali strategy of tiring your opponent out first requires patience and a colossal amount of cardio. Mayweather won the fight fair and square. Yet McGregor shocked us all for holding his own and lasting as long as he did. I didn't like the trash talking between McGregor and Mayweather. It may have just been WWF nonsense but it lacked class. Both opponents are accomplished athletes and both deserve respect.