Rising above Hate and Intolerance 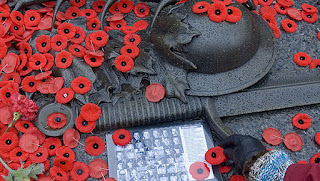 I didn't attend the hate rally in Vancouver today. I knew I'd get in a fight and end up in jail so I stayed home. There is nothing patriotic about marching with a swastika. Christians do not celebrate the genocide of millions of Jews. That is not something Jesus would do.

Arnold Schwarzenegger is from Austria and has a powerful message for the enemies of the constitution parading around with swastikas. His youtube message is "The country that defeated Hitler's armies is no place for Nazi flags. I have a message to the neo-Nazis, the white nationalists and the neo-Confederates. Let me be as blunt as possible. Your heros are losers."

"You're supporting a lost cause. Believe me, I know the original Nazis. I was born in Austria in 1947, shortly after the second world war. Growing up I was surrounded by broken men, men who came home from the war filled with shrapnel and guilt. Men who were misled into a losing ideology and I can tell you these ghosts that you idolize spent the rest of their lives living in shame and right now they are resting in Hell."

"I know that you weren't born with these hateful views. No one is. But the truth is it's never too late to make the choices to learn to evolve and to understand that all human beings have equal value. Don't hang around people that carry Nazi flags. Go home. Or better yet, tell them that they are wrong to celebrate an ideology that murdered millions of people and then go home."

Wear a poppy instead of a swastika. Lest we forget. "Take up our quarrel with the foe to you from failing hands we throw the torch. Be yours to hold on high. If ye break faith with us who die, we shall not sleep though poppies grow in Flanders' Field." Peace. 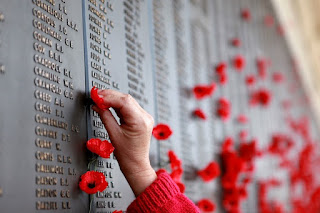 Turns out it was an anti racism rally in Vancouver not a hate rally. That's more like it.

The Canadian Press is reporting that "A handful of individuals opposing the anti-racism protesters showed up and were quickly ushered away by police when verbal confrontations appeared as though they could become physical. There were reports earlier this week that an extreme right wing protest was planned, but it never materialized." 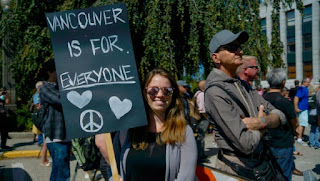