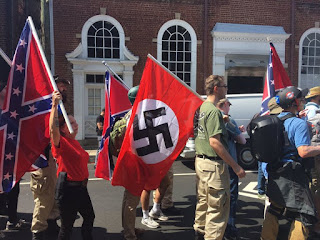 CBC is reporting that "The college town of Charlottesville, Va., is quiet this morning after two days worth of rallies between pro-white demonstrators and counter-protesters turned deadly, with a motorist ramming a car into a crowd."

This is so absurd I hesitate to comment. Yet the presence of the KKK and the Nazi flag is without question an act of war requiring comment. The only hesitation I have is in believing these kind of idiots can still exist in our day. I can't help but think the CIA has implanted agent provocateurs to stir the pot and create division since that is what they always do. In Canada, CSIS created a White Supremecist group calld the Heritage Front. They continued to fund it after they created it.

Yet we saw it recently in Charlottesville. People displaying a Nazi flag beside a confederate flag. That is like pissing on a good soldier's grave. It reminds me of Ricky Ciarniello posing with a Nazi flag along side his buddy David Black from the Satan's Angels who were convicted of brutally torturing hippies they kidnapped as butlers. It's all in chapter seven of my free ebook.

The presence of the KKK is shocking. There is absolutely nothing more hillbilly than that. It is a tragic sign of uneducated inbreeding. It is nothing to brag about. Seeing people display these kinds of inflammatory signs once again makes me think agent provocateur since those signs are so offensive to anyone with a brain and a heart. 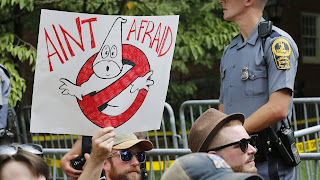 Then the counter protest rightfully begins. Yet it all reminds me of a discourse posted online years ago called F*ck the South. Who on earth would want a union with a group of people that fought a war for the right to keep slaves? Not I. That is why the United States had a civl war. To cleanse itself of bigotry and adopt the principles of the US Constitution and a Free Republic.

Nazi's and Communists hate each other but they are one in the same. One is extreme left while the other is extreme right yet both extremes arrive at the same destination: Dictatorship and the destruction of civl liberty for all. Buyer Beware. Draw a line in the sand and call it democracy. The further away from that line you go to the left or the right the further away from democracy you go and the closer you get to dictatorship. It's that simple. Communism and Fascism are both evil. They are one in the same. Hitler murdered an obscene amount of people. Yet Stalin and Chairman Mao murdered even more. Lest we forget. Hillary Clinton is still evil.

Update: With regards to this ridiculous reference to white Christian males, I will say this: there is not a Christian on the face of the earth that would be seen marching with a swastika supporting the holocaust. That is not something Jesus would do. Anyone who does that and claims to be a Christian is a liar and the truth is not in him.

Right now North America is like Poland before the second world war. First the Fascists invade and we say God help us. Then the Communists arrive and say we'll save you. No thanks. I say f*ck them both. We need to shun extremism and save the Constitution. All men and women are equal regardless of race color or creed. It's that simple. We need to protect civl liberty as defined in the US Constitution, Canadian Charter of Rights and the Irish Proclamation.