The Undaunted Voices for Human Rights in Vietnam 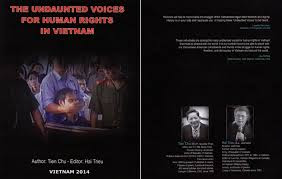 While we are on the subject of Communist invasions, I'm going to recommend a book I recently came across called The Undaunted Voices for Human Rights in Vietnam by Tien Chu and Hai Trieu. I met the editor at a demonstration outside the Surrey Fusion Festval.

The book consists of interviews with 47 witnesses to Communist oppression in Vietnam. Any Canadian or American that does not understand the Vietnam war needs to read this book. You can order a copy of the book by contacting the editor at: nsvietnam@yahoo.com If you send him your mailing address and email transfer him $25 he will send you a copy of the book.

The book interviews a Buddhist monk named Thich Khong Tanh as well as Father Phan Van Loi who itemized the Communist inconsistencies along with numerous other witnesses including Father Thadeus Nguyen Van Ly, Pastor Nguyen Cong Chinh whose wife is being persecuted while he is in prison and a blogger named Ta Phong Tan. 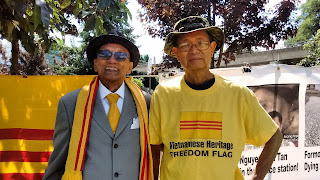 These are Vietnam vets who served in the Vietnamese army and continued the battle for three years until they ran out of ammo after the Americans were forced to withdraw their support from political pressure within. They survived five and ten year sentences in Communist prison camps after the Communist invasion. We owe it to these wonderful Canadians to hear their story.

I have a huge respect for Martin Luther King. He was a wonderful person and a passionate activist. I do however, completely disagree with him on the Vietnam war. Canada should have participated in that struggle just like we did in the Korean war. We need to understand what really happened so we can honor those who did fight the good fight and lost.