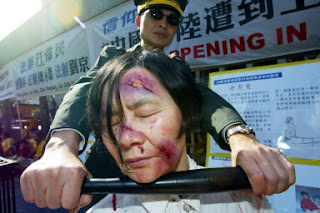 I want to pause amidst the current tensions between the US and North Korea to examine and clearly define who the real villains are in this smoke and mirror travesty. As we have previously discussed while the world prepares for the 2018 Winter Olympics to he hosted in South Korea, we need two raging lunatics to sit down and shut up.

However, I want to be clear that Donald Trump is not the real villain here. He is not the one threatening to nuke random countries. He is threatening to retaliate if North Korea fires a nuclear missile towards them or any of their allies. That is not crazy. That is common sense.

Nor do they exist in Communist China where they execute political prisoners on order for their organ harvesting enterprise. China says it would remain neutral if North Korea attacks the United States, but warned it would defend its Asian neighbor if the U.S. strikes first and tries to overthrow Kim Jong Un’s regime. That is not neutral. China is still the one pulling Kim's strings.

When China says they will remain neutral if North Korea nukes the United States that clearly means they are endorsing it. Why else would China object to the United States building an Iron Dome Missile Defense system in South Korea in preparation for the Winter Olympics? A missile defense system for South Korea is the most peaceful and logical solution conceivable. Communist China is objecting because they are the real villains in this whole scenario.

I don't like the use of nuclear weapons on civilians. Hiroshima and Nagasaki were complete tragedies that should never be repeated. However, if Kim Jong-un launches a nuclear attack on anyone else then the city he is living in should be nuked in response. That is automatic. It is a natural consequence of his actions. It's called the balance of power which believe it or not does help preserve world peace.

Without question Communist China is the real villain here and we need to remember that. That's why we need to reexamine our own complacency and reassess our culpability. Selling China natural gas is much better than selling them coal. Fracking aside, natural gas is clean burning, coal is not. If China used natural gas then their massive pollution problems would ease and this world would be a better place to live with les CO2 emissions polluting the atmosphere.

However, selling China fuel is very different than giving them our oil rights. If we sell them fuel we can stop selling it to them if they invade another country again. Now they own our oil rights. That means if they invade another country we can't cut off our oil. That is insane. Right now, thanks to Stephen Harper every time we get gouged at the pump filling our vehicles up with gas because of the corporate monopoly on oil, we are in reality funding the military expansion of a communist dictatorship complete with all it's obscene human rights abuses.

To make matters worse Canada is another villain in this nuclear arms race because we are selling Communist China Canadian reactors which gives them the technology and the materials to make and export nuclear weapons. China supplies North Korea. In essence, Canada is helping arm Kim Jong-un with nuclear missiles. That is evil and needs to be addressed.