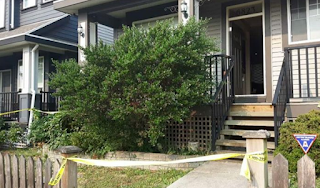 Global is reporting that "An 18-year-old man is in hospital in serious but stable condition after a shooting in Abbotsford, early Sunday morning. Police were called to the 2700-block of Mitchell Street just after 4 a.m. and found a young man with gunshot wounds. He was transported to hospital and his injuries are not considered life-threatening. Witnesses reported seeing a dark vehicle driving away from the scene at a high rate of speed. It’s the second shooting involving a teenager in just three days."

Earlier this morning the Peace Arch News reported that "Police were on scene of a reported shooting incident in Clayton Heights near the Surrey-Langley border. Police tape is up around a house on 196 Street near 68A Avenue. Neighbours said police swarmed the area Saturday night after a report of gunfire within a house in the normally quiet neighbourhood.

Update: Turns out three houses were but by bullets in Clayton heights. It wasn't a drive by. One house was shooting at the other. That's what happens when you start using too much of the product. News 1130 is reporting that: "Three homes in Clayton Heights have been hit by bullets, according to the RCMP, which was called about damage to a home this weekend. Mounties say an investigation on 196th Street near 68th Avenue also uncovered weapons, explosives, and precursors to drug production. The report came to police Saturday about an incident that happened on Friday. Neighbors tell NEWS 1130 they heard what appeared to be gunshots fired from one home, into a bedroom window of another." y

Another shooting in Clayton Heights

2nd Update: Global is reporting that shots were fired at a townhouse and vehicle in the 7000-block of 180 Street around noon Tuesday (Today). No one was hit.