Save Hawthorn Park and get rid of Linda Hepner 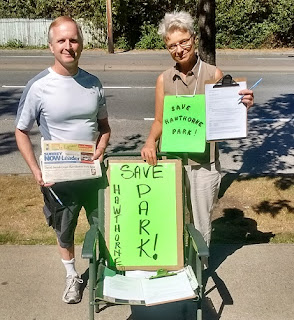 This is astounding and is the perfect example of the level of arrogance, stupidity and corruption we are dealing with at Surrey City Hall. This is a matter for the New York Times. Christy Clark had nothing on Dianne Watts and Linda Hepner.

People have been talking about Save Hawthorn Park and I haven't really paid too much attention. I assumed they simply wanted to shave a slice off the edge for road expansion. Not so. They want to build a road right through it. So I looked at the map and said OK where do they want to put the road? I look at the map and said that's right through the kids water park and playground. This is the best kids playground in the city tied with Beer Creek. Putting a road right through that playground and waterpark is sheer stupidity. Then comes the reason why. There's actually two.

The first phase is Campbell heights dejavu. The second phase is even worse. Phase one includes a plan to put in a couple of high rise towers in the park. Big surprise. This is yet another case where they sell public land to private developers that contribute to their campaign at a firesale price. Then rezone the green space into industrial or in this case high density housing so their campaign contributors make a fortune. This is insider trading 101. They put Martha Stewart in jail for less than that. The second phase involves a proposal to put LRT in Surrey.

So I ask, what, they want to extend Skytrain again? Nope. They want to put an on ground rapid railway from Guildford to Surrey Place Mall. That is the stupidest idea in recorded history. The bus system from Guildford Mall to Surrey Place is perfect. It' a short quick trip along a simple direct route. There is nothing wrong with the status quo. Putting an on ground railway through the middle of the city is insane. Waiting for trains in a city is painful at best. Forcing all traffic crossing the line to wait for trains to pass with completely disrupt traffic and totally screw up the traffic light synchronism. Traffic will be at gridlock.

Skytrain for Surrey states that "One of the first major victims of Surrey’s shortsighted and problem-riddled plans for street level Light Rail will be Hawthorne Park." Street level Light Rail going through the middle of the city will create chaos for cross traffic and is without question a shortsighted and problem-riddled plan for Surrey. So let's follow the money. Or should I say let's follow the misappropriation of tax dollars.

Phase One: Why do they want to put a road right through Hawthorn Park? So they can let their dirty developers put in two towers on green space and make a fortune then get a kickback in campaign contributions just like they did at Campbell Heights Industrial Park.

Phase Two: Build a short sighted and ill planned on ground rapid rail we do not need that will throw traffic into chaos so they can give the contract to SNC-Lavalin the most corrupt construction firm on the planet just like they did for the Evergreen Skytrain line.

Sign the petition yes. Join the facebook group but more importantly we need to elect a new mayor. That is the only thing that will stop the insanity. Doug McCallum suports saving Hawthorn Park. Imagine that. He also suports a safe Surrey. Only unlike Linda Hepner and Dianne Watts he's not all talk no action. He took an aggressive role against crack houses in Surrey when he was mayor. I saw it. This is what we need to address the crime on the Surrey Strip.

Save Surrey Parks is reporting that "The city is determined to build a road through Hawthorne Park despite wide-spread opposition. To do this, they need to pass a bylaw removing the park’s protected status. For now, this campaign is about saving Hawthorne Park. However, if council succeeds in removing its parkland dedication they will set a precedent for future park development. Surrey Mayor and council have launched the Alternative Approval Process, allowing them to avoid a referendum. By signing this Electoral Response Form you are telling council that you are opposed to the removal of Hawthorne Park’s protected status."

For residents of Surrey, this is a copy of the new form the city is requiring people to print and sign. This is the address of the office where the form needs to be dropped off at which is also on the form. It's in the new ivory tower at Surrey Central: 5E 13450 104th Avenue Surrey, BC.

Here are three businesses in Surrey you can drop off signed forms at: 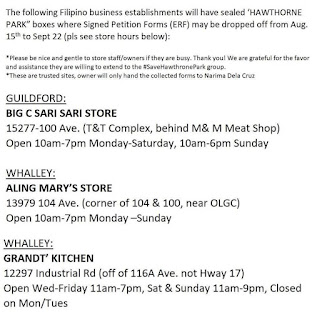 You could still build a couple of towers on 104th Avenue without putting a road right through Hawthorn Park. Saving the park and playground would be a selling feature for the condos. If you sell the land at a fair price instead of giving it away for free to your campaign contributors you could use the profit from to deal to help pay down Dianne Watts record debt she left us with and help pay for that Ivory Tower you built for yourselves. However, building an on ground railway through the middle of the city is the stupidest thing I have ever heard of. It would be an insane waste of money. Stop burning tax dollars are start being fiscally responsible.

Watch the Video on SaveSurreyParks.ca

Turns out their stupid road is going to go right through an elementary school soccer field.

I'm having a hard time understanding why Hjorth Road elementary needed volunteers to install a new playground that was donated by a US non profit organization, when the Dianne Watts kabal spent an obscene amount of money for a new Ivory tower City Hall that same year.