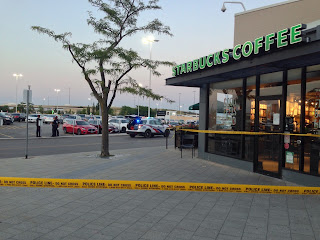 City News is reporting that "Toronto police are searching for two suspects after a shooting outside a coffee shop at Sherway Gardens in Etobicoke. Police were called to the plaza around 7:30 p.m. on Wednesday following reports of shots being fired. A man had been shot in a parked car near the Starbucks. Paramedics say the victim was taken to a trauma centre with critical injuries. A second man who was also in the car at the time of the shooting was hit by shattered glass. His injuries are not life-threatening. Both victims are in their 50s."

Posted by Dennis Watson at 5:37 AM