Site C: A Dam that is built on sand will not stand

As I have previously mentioned I have been fairly impartial about the Site C Dam. I support hydroelectric power since it is green and cost effective. I never completely understood the big hullabaloo opposition to the plan. I understand people who live in the area don't want to lose their homes and farms. Now I am beginning to understand a bit more about the fertile nature of the valley and how that is good for farming but lacks sufficient bedrock to form a solid foundation for a huge dam of that magnitude.

This discussion is relevant and timely because of the recent change in government. The Greens hold the balance of power and oppose the project. That means they have the power of veto on the whole thing. Laila Yuile has been opposed to the project and I respect her right. I believe in free speech. If people have legitimate concerns with the project let's hear them.

Laila put out an amusing article about how a pair of nesting eagles were violating the court injunction. Right after that her blog and twitter were hacked by someone pretending to be Anonymous but it obviously wasn't them because they had no motive to hack Laila's blog. It was obviously corporate hacks desperately trying to censor her impersonating Anonymous. Which led me to ask Really guys? Why go through that much trouble? Are you that scared one eagle's nest is going to create enough of a public uproar to shut the project down?

Norm Farrell has written some relevant posts on the Site C Dam. The fact that SNC-Lavalin got the contract to build the dam through shell companies was a criminal act all in itself.

Now it has come to my attention that there is no bedrock under the Site C dam to build it. SNC-Lavalin lied. Below the silt is sandstone. That means if an earthquake hits, the dam will break. It's very fertile land like the Fraser Valley delta. That means it's great for farming but bad for building. Perhaps letting the Green Party veto the project will be in everyone's best interest. 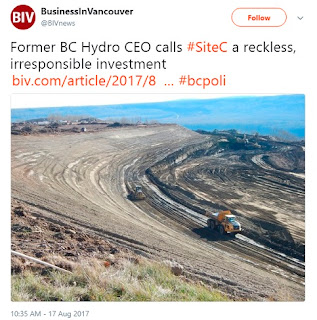