Another shooting in Toronto - Summer of Mob Violence 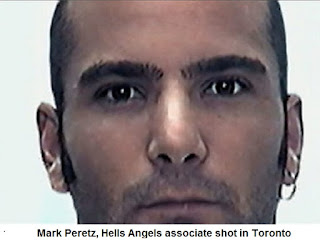 Toronto Metro News is reporting that "Two men are in serious condition following a shooting in a downtown hotel early Saturday. Toronto police Const. Caroline de Kloet said two men were found with gunshot wounds in the lobby of the Hyatt Regency hotel at King St. W. and Peter St. near Spadina Ave. around 4:30 a.m. “One man had a gunshot wound to his stomach and the other man had a gunshot wound to his leg,” she said. Both were conscious and breathing when they were transported to hospital."

The Toronto Star is reporting that in last Wednesday's shooting Mark Peretz was shot and was the intended target. He was involved in that tragic shooting in Toronto where a mother was paralyzed from a stray bullet during a Hells Angels hit back in 2004.

Evidently there have been numerous shootings in Toronto. CBC reported that on July 31st a gunman entered a bar and shot one man dead while injuring four other men. The shooting took place on the patio of the Libertarian Public House and was caught on video surveillance.

CTV reported that 24-year-old Roy Khan was shot dead on July 28th in Woodbridge just outside of Toronto. Kevin Khemraj Deonath has been charged with second-degree murder.

The Toronto Star reported that on July 17th three men were shot outside a sports bar. "Organized crime investigators are looking into whether the Monday night shooting of three men outside a Woodbridge sports bar is connected to a string of violent attacks in York Region."

The Toronto Star reported that on June 29th 2017 a massive explosion knocked a wall out of the Caffé Corretto in Woodbridge. "Arson, murder, hails of gunfire - a string of attacks in Hamilton and York region has police wondering whether southern Ontario is becoming the battlefield for a summer of mob violence." Juan Eduardo Munoz was charged in the bombing of the cafe.

"Just days before the Woodbridge explosion, mobster and baker Pasquale (Pat) Musitano’s Hamilton home was sprayed with bullets. And on May 2, Musitano’s younger brother Angelo Musitano was shot to death in the driveway of his home in Waterdown, Ont., while his wife and preschool-aged children were inside. The Musitano brothers pleaded guilty to conspiracy to commit murder in the 1997 fatal shooting death of Niagara crime boss Carmen Barillaro after their hitman, Kenny Murdock, turned against them." 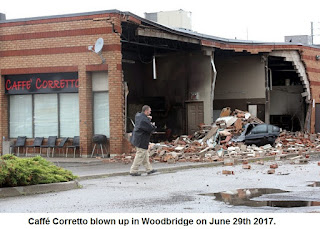 Although Mark Peretz was a Hells Angels associate, the botched murder attempt he was involved with in 2004 that left the mother paralyzed was in conjunction with mobster Peter Scarcella who was a driver that killed his boss. Michele Modica was the target in the 2004 Sandwich shop shooting. He has ties to New York.