The Washington Post is reporting that "China demanded the United States immediately withdraw a package of sanctions on companies and individuals trading with North Korea on Wednesday, and said the decision by the Trump administration will damage Sino-U.S. ties. The Treasury Department placed sanctions Tuesday on 10 companies and six individuals from China and Russia that it said had conducted business with North Korea in ways that advanced the country’s missile and nuclear weapons program."

Canada’s reactors are great at producing weapons-grade plutonium. India conducted it's first nuclear test thanks to Canadain nuclear reactor technology. The test was called the Smiling Buddha and used plutonium from the Canadian reactor.

Alexander Solzhenitsyn: Warning to the West 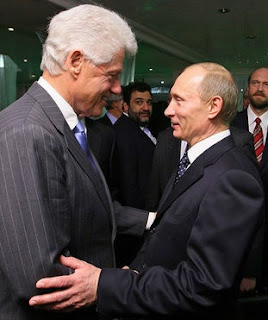 Just to clarify Donald Trump was correct in that the Clintons sold Russia weapons grade Uranium for nuclear missiles. That was reported in the New York Times. The fake news threw out a couple of false headlines claiming he was wrong when he said they sold Russia 20% of the US Uranium deposits implying that they didn't sell Russian any Uranium which is exactly what they did do.

The fake news spins the story with the headline Trump's claim is "mostly" false hoping people will brush it off without reading the article and sluff it off as another one of Trump's rants. However, this rant has merit. The fake news spin states "the claim that Clinton gave 20 percent of America’s uranium to Russia is incorrect and clearly misleading. Trump is referring to Russia’s nuclear power agency purchasing a majority stake in a Toronto-based energy company between 2009 and 2013." They are splitting hairs over the 20% claim and trying to defuse the world form the seriousness of the allegation on a technicality.

The New York Time Times reported that “Few could have imagined in the past that we would own 20 percent of U.S. reserves,” Mr. Kiriyenko told Mr. Putin. The fake news spin doctors claims that "The mines, mills, and land the company holds in the US account for 20 percent of the US’s uranium production capacity, not actual produced uranium.

The fake news is splitting hairs over the claim 20% of the US Uranium by stating production capacity is not actual produced uranium. Like WTF? They throw in some other absolutely ridiculous false claims to distract the public from the truth. The Clintons sold Russian a sh*t load of weapons grade Uranium which is illegal. They had to use a Canadian shell company in Toronto to sneak the deal through. This is why the Clinton cult's claim that Trump was in bed with Putin is absolute hypocrisy since Hillary sold them weapons grade uranium which could in fact end up in the hands of North Korea. Spinning the story knowing that fact is pure evil.