Kim Jong-un is a terrorist supported by China 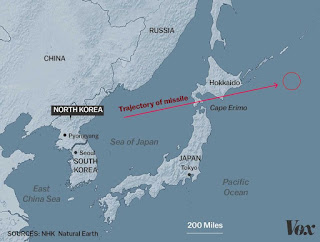 The New York Times is reporting that North Korea launched a missile over Japan today. That is an act of terrorism. Here we have a crazed dictator threatening nuclear war launching over 80 test missiles in open defiance of world peace. He threatened to nuke Guam and sent them into panic releasing public bulletins about what to do in a nuclear attack.

Japan needs an Iron Dome Missile Defense system. So dies Guam and Canada. That is the most logical and peaceful solution to the bold defiance of a raging terrorist. Economic sanctions are also in order. China's objections is evidence of their criminal culpability.