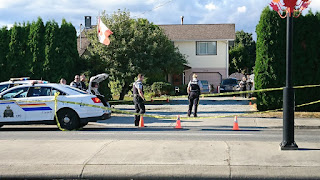 The Peace Arch News is reporting that "One man is in hospital after a shooting at a residence in west Maple Ridge on Sunday afternoon. According to a bystander, a man was shot two times, once in the stomach and again in the upper thigh after he was confronted by a man wielding a gun. The shooting took place in a shed-like structure at the front of the house. When police arrived, they ordered everybody out of the shed with their hands up. The victim was helped out by two other men. He was conscious, coherent and screaming in pain. He was rushed to Ridge Meadows Hospital for his injuries to be assessed."

BC News Feed is reporting that "There's nothing worse than being ripped off by your employer Maple Ridge shooting Dewdney Trunk Rd." Ah yes, we've heard that song before in Haney.