Love is the absence of judgement but is it really? 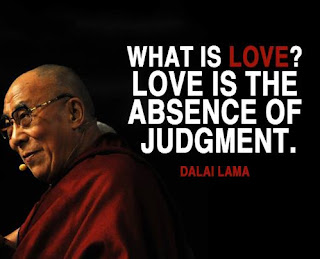 Every year I buy a Zen Calander because I like the positive pictures and the positive quotes. This month the quote reads "Love is the absence of judgement" by the Dalai Lama. Now I have mad harsh respect for the Dalai Lama and totally support his struggle to free Tibet from the yoke of Communist bondage. That is why I think we need to put the quote into proper perspective.

Everyone makes mistakes and we do need to look past those mistakes when someone recognizes them and practice forgiveness because as Martin Luther King taught, the old law of an eye for an eye leaves everyone blind. Yet we are not called to accept unacceptable behaviour. I've heard the term, hate the sin but love the sinner.

Since this is Valantines day it is worth asking ourselves what is love? Christ said "Greater love hath no man than this, that a man lay down his life for his friends." Now that's as real as it gets. That's not fake, sentimental or selfish. That involves the ultimate sacrifice. Putting someone else's needs above your own. Yet I do not believe that means allowing yourself to be abused.

We've heard it said, judge not least ye be judged. For the most part, I believe that to be true. I have also heard it said make no unrighteous judgement because every day we are called to discern between good and evil which involves making a judgement and making a choice. Let's once again look at the Dalai Lama. He's in exile because Tibet is in bondage.

Real love does not tolerate or promote evil. Sometimes we have to walk away from the hate like Brandon Straka has. When we do that, we find peace. Inner peace that comes from knowing we did the right thing in a difficult situation which one day might make a difference. Hate is a burden. It's unhealthy. Yet so is evil. We need to shun both. Charity is love in action. That's real love. 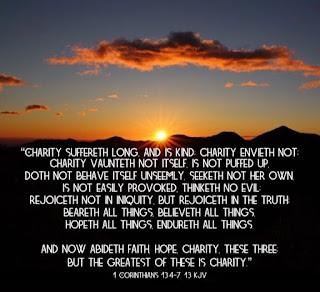