Surrey landmark torn down to make way for new tower 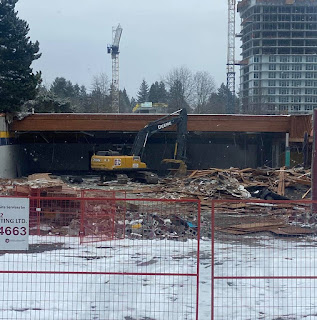 The Surrey Now Leader is reporting that "Surrey’s former Stardust building was torn down on Saturday, Feb. 13. An excavator ripped through the City Parkway structure as part of site preparation for a 49-storey tower." I realize the vast majority of you have no idea what this was and likely don't give a rat's a*s, I will cite it because it was such a longstanding landmark in Surrey. I'm pretty sure the rats from the Surrey Girl chapter of the red and white (now working for the boys in bluie) have no idea what it was except for Randy Jones. He might know.

Stardust was an old roller-skating rink that was in the heart of a bus loop known as the Whalley Exchange for many years. My daughter had a birthday party there when she was young. Anciently the Whalley Exchange was a low life hang out for young criminals back when the Walley Burnouts were a thing. That was long before the Hells Angels. The Hells Angels drug dealers started turning young girls into crack hoes outside there until they were moved down the street to the Front Room when the new City Hall moved in. That's where they killed Janice Shore.

Unlike Pancho's which was a toilet in desperate need of flushing, Stardust carries many fond memories. Yet new towers mean more work, more immigrants and more economic prosperity. That's progress. That's what we need right now. The more people that move here the more work there is for everyone. That's how an economy thrives. If of course the government steps back and minds it's own business so commerce can prosper. We just have one more toilet to flush.