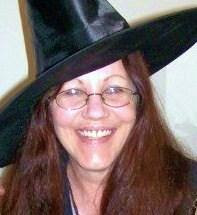 I've talked about how consuming oneself with the dirty laundry of others is a less than positive quest. Yet the pursuit of knowledge is a good thing. Realizing that someone who has made threats of physical violence against you has also talked about killing is an important fact to realize.

Everyone talks about Rene and her claim to be Wiccan and how she goes by the username CopperWoman. Now just because someone is Wiccan doesn't necessarily mean they are a Satanist. We had a good friend on the GO blog who was Wiccan. Yet according to WiccanWeb.ca News CopperWoman and Makarios run the Wiki. If you want to volunteer, contribute knowledge, expertise, suggestions or request an article please post in the forums or PM the editors.

Their feature article is about THE SATAN GODDESS and claims "Wiccan males are given to the piercing of skin as a sign of submission to their master, the SATAN GODDESS. Wiccans and Pagans commemorate her feast day on January 28th, which is known only to Elitists as the top secret, extra special, oathbound ninth festival on the Witch's Wheel." 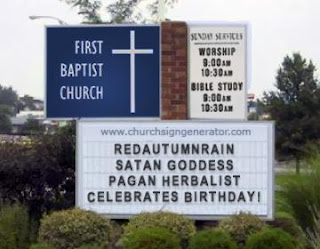 In fact they used the online Church sign maker to say Pagan Herbalist Celebrates the Satan Goddess' birthday. Although I find it a bit strange for a Wiccan to be celebrating their evil Satan Goddess' birthday and how she claims Wiccan males are given to the piercing of skin as a sign of submission to their master, the SATAN GODDESS I will boldly declare that freedom of religion exists in Canada and their is nothing illegal about believing something many others think is just plain dumb.(I can't believe RedAutumnRain used the term Muggles. That's from Harry Potter)

I will also boldly declare that persecution of witches was something from the dark ages. Strange people would do horrible things to people for bizarre reasons even burning them at the stake. Thank goodness society has evolved from that. Yet Rene does talk about how Wiccan persecution still exists and eludes to the fact that might have been the cause of the fire she was involved in where she claims she received brain damage.

It is the comments about how she claims she would exploit her brain damage as a defense to rationalize her killing someone that disturbs me. As does her claim to be cold and calculating:

I do have brain damage....for real (VMPC plus a variety of other neurological issues caused by smoke inhalation from a toxic chemical accerlerant - yipee!) and I am far more compassionate NOW than I was before the fire. However, given the limited and extreme options, I would kill the person making the request and tell everybody else what was what going on.....then blame the lack of impulse control, executive function etc... on the brain damage....just to skew their results. The alternative, duh....is to refuse to participate in either the killing or the doing nothing options. Brain damage did not alter my IQ or my common sense!

I won't get into what was scientifically incorrect about their research model.

Here she claims "given the limited and extreme options, I would kill the person making the request and tell everybody else what was what going on.....then blame the lack of impulse control, executive function etc... on the brain damage....just to skew their results."

She talks about killing someone then rationalizing it by the lack of impulse control she has due to her brain damage she incurred in a fire. Wow and she claims she is far more compassionate now than she was before the fire. Interesting.

When this information was posted on the GO blog long ago, the links to the identity of the CopperWoman profile were removed yet we have a list of witnesses who saw it was Rene.

Perhaps our beloved Wiccan Outlaw is from the House of Gryffindor and Rene is from the House of Slytherin. I know Wiccan Outlaw isn’t a Crowley Cronie. Perhaps CopperWoman is. Locally there are many rumors about Satanic groups in Victoria. Perhaps that’s why Rene moved there. They say it's the witches capital. The fact that the Satan Goddess is some of their evil masters is “the top secret, extra special, oathbound ninth festival on the Witch's Wheel."

After all, not all Wiccans celebrate their evil master the Satan Goddess’ birthday like Rene does. Then again, what do I know? I’m just a muggle.

People have been asking me so I’ll make a clear clarification. No I don’t think Rene’s involvement with the occult had anything whatsoever to do with Dustin’s injuries. It might have something to do with why she moved to Victoria but it clearly has nothing to do with Dustin’s injuries. I have no idea what Paxton was into. I highly doubt he was into the occult. I think Paxton was a sick individual who might have had some outside help or motivation to gain control over Dustin.

Posted by Dennis Watson at 7:39 AM