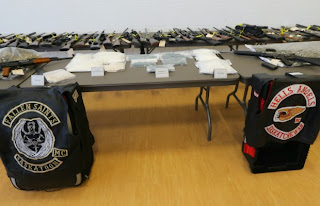 The Star Phoenix is reporting that police executed search warrants on various properties in Saskatoon including the Hells Angels clubhouse. There was also a couple of shootings at a crack house in Prince George recently. Billy Moore's son was caught with firearms and crack again.

Update: Police are reporting that during the searches they seized 5.4 kilos of crystal meth, 2.6 kilos of cocaine and over 3,000 fentanyl pills which is fake oxycontin as well as over 200 firearms and tens of thousands of rounds of ammunition. The Star Phoenix is reporting that the fentanyl pills found are linked to several recent deaths in Saskatoon .

The name of the puppet club this time is Fallen Saints. As we recall it was the Zig Zag crew that were busted in Winnipeg for selling crack for the Hells Angels. CJME is reporting that "Two full members of the Saskatoon Hells Angels and the president of the Fallen Saints (FS) motorcycle club are among the 14 men arrested by police Wednesday morning in one of the province's largest drug raids. Hells Angels members Terry Eide and Rob Allen and FS president Mark Nowakowski were taken into custody after RCMP, in conjunction with local police forces, raided 19 locations in Saskatchewan and Alberta."

This is a picture of Rob Allen: 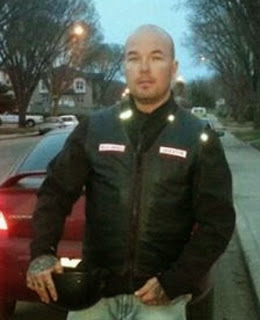 Rob has been charged with two counts of trafficking cocaine.

This is a picture of Larry Booth, the former sergeant at arms of the Saskatoon Hells Angels. 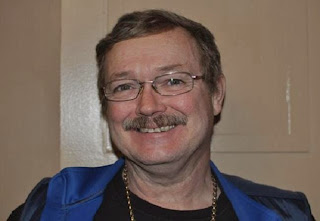 He looks a lot like Austin Powers. He also looks very g-a-y. Not that there's anything wrong with that. Discrimination based on sexual orientation is indeed prohibited by law. However, I don't think that's why he's suing Xtreme Mining for wrongful dismissal. I think he's suing for unlawful dismissal because of his membership in a criminal organization. I don't think this additional drug bust is going to help his case much. Bad luck. It's no wonder the HA rivals are so strong out there. He sure doesn't look very intimidating.

This is a picture of Terry Eide: 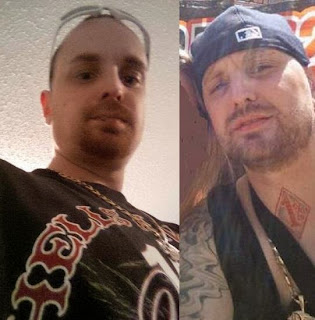 The Star Phoenix is reporting that Terry Eide of Calgary, charged with trafficking cocaine, trafficking fentanyl and possession of property over $5,000 obtained by crime. Police say Eide is a full-patch member of the Hells Angels.

This is a picture of the Fallen Saints CJME found on Facebook:

It appears that most of the firearms came from a store called Badger Arms Supply.