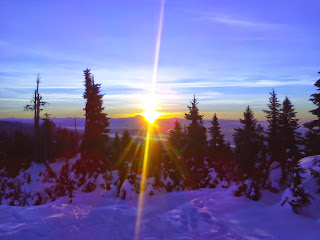 A new day and a new year begins. Let's hope it's a better one. I'm not shutting down the blog. I was just f*cking with the CSEC b*tches that are up in my sh*t. I hate those privacy violating pricks. I am pulling back a bit and just focusing on the Hells Angels and the CIA's drug trafficking. Yet I'm not going to obsess over it because it is too big for me to do anything about. There will always be good and evil. My purpose is to show the difference between the two and offer support to those who have left the life. On that note, a big shout out to the Brothers and Sisters from TBM Fresh Start in Scandinavian and now Canada as well. New Years are all about new beginnings. 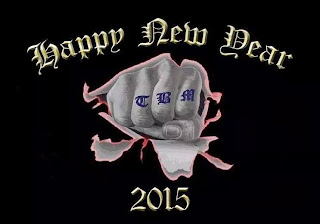 I see Pitbul hosted a New Years Party in Miami last night. I like Pitbull. Michale Green, the International Spokesperson from Scandinavia reminds me of him because he's fly like that. I hear Pitbull is not allowed back in Cuba because they have banned regaton music there. That's pretty messed up. I'm a bit leery of all the trashy New Years parties that run rampant though.

For me New Years doesn't begin at midnight, it begins when the sun breaks the horizon New Years Day. The countdown consists of the glow before the sun bursts over the horizon. My favorite thing to do on New Years is to snowshoe up the mountain in the dark before sunrise with a headlamp and watch the sunrise from a snow covered peak. That's my ideal New Years. It's pretty hit and miss in Vancouver because you need a sunny day but today was a grand slam. The sunrise was awesome. Above is a picture of today's sunrise from Hollyburn Ridge on Cypress mountain.

Coming down from the mountain you could see the inversion begin. That's when the clouds hang low so you're above them when you're in the mountains like when flying over them in a plane. The mountain range in the distance is Vancouver Island. The white fluff that looks like snow at the foot of them is low clouds all the way from Vancouver to Vancouver Island. Peace 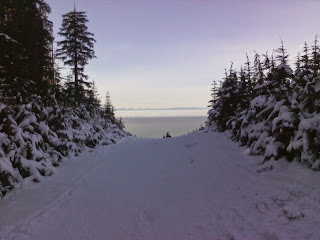 Posted by Dennis Watson at 1:04 PM