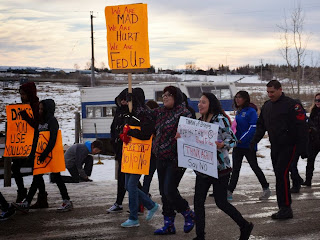 The Calgary Herald is reporting that members of a First Nations reservation southwest of Lethbridge have been holding rallies to unite against the distribution and sale of pills sold as OxyContin, but are suspected to be fake variations that contain a potentially lethal narcotic. Police claim the drug is responsible for 10 deaths on the reserve in the past six months. Police believe the pills circulating on the reserve contain fentanyl which is what was found in the recent Saskatchewan bust tied to the Hells Angels.

"The investigation at the reserve follows a series of raids last week in Saskatchewan and Alberta where police seized more than $8 million worth of drugs, including over 3,000 fentanyl pills with the same chemical composition as narcotics linked to three overdose deaths in Saskatoon."

"Thirteen of the 14 people charged in the bust are members of the Hells Angels or the Fallen Saints, another motorcycle gang, police say. Terry Eide, an alleged full-patch member of the Hells Angels, was the lone Calgarian arrested in the raids. He was charged with two counts of trafficking a controlled substance, one for cocaine, the other for fentanyl, and one count of possession of property obtained by crime."

"Pamela Little Bear, who lives on the Blood Tribe reserve, said her nephew was in his early 30s when he died about five months ago from an overdose suspected to be caused by the fake OxyContin, leaving behind two young children. Little Bear is among a group of Blood Tribe members who have held three recent rallies and an information session on Thursday to educate their community about the dangers of the drug and call on dealers to leave."