Cocaine in the UFC 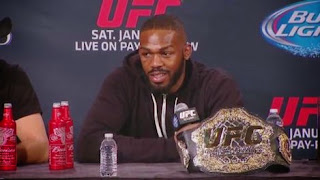 Recently it was reported that UFC light heavyweight champion Jon Jones tested positive for cocaine. Which is fine because cocaine isn't a banned substance in the UFC, only pot is. WTF. Pat Healey tested positive for pot and lost all his bonus money. He wasn't under the influence of pot it was just in his system. Pot isn't a performance enhancer.