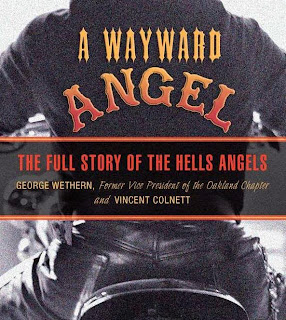 Here's one I had posted in the archives worth reviewing. It's a quote from A Wayward Angel by George Wethern Former Vice-President of the Oakland Chapter of the Hells Angels.

"The Oakland Angels began issuing new charters and assisting chapters set up their own drug operations. The additions were designed to contribute to our image and business concerns, by providing a drug route link, manufacturing a drug, supplying chemicals, or distributing drugs in an untapped area."

"One morning at 6 o'clock, I was speeding on 'crystals' when I saw a window light in Sonny's place which was patrolled by a pair of Dobermans behind a chain link fence. Inside, I found Sonny and Mexican Ed, a reputed member of the Galloping Gooses motorcycle club in San Diego and main supplier of the Berdoo Angels, cutting and packaging a salad bowl full of smack."

"As we chatted and snorted coke (Sonny's favorite drug), I helped them fill balloons. Sonny's dealers in the club arrived at evenly spaced intervals to pick up their loads - usually an once or two - then they made their dumps. Sonny was smart; he wasted no time in getting those drugs out of his house." Former El Segundo Air Force Clerk Admits Drug Conspiracy