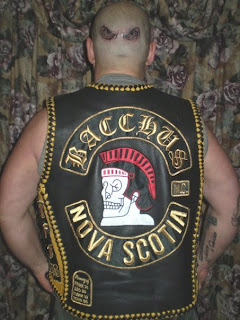 Back in 2000 Derek was caught with $85 thousand worth of crack cocaine, marijuana, and hashish as well as a loaded handgun. In 2007 Derreck was described as a drug kingpin and was sentenced to 6 1/2 years for conspiracy to traffic in cocaine. In 2005 a member of Bacchus named Derreck Dean Huggan was arrested in a cocaine trafficking ring connecting Halifax to PEI. Huggan ran a Hells Angels support shop called Route 81 in Charlottetown that sold Hells Angels support gear.

Police had to dispatch the psychiatric ward recon team to send him back to his rubber room. Pat James from Haliax is the clown with the eyes tattooed on the back of his head. That whole chapter are a bunch of clowns. This 81 support clown is dressed up as a Roman soldier not a Greek god just like their patch. That means their Bacchus was the Roman soldier who was openly gay and secretly Christan not the Greek god. Big surprise. Flaming idiots the lot of them. 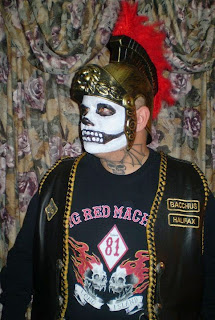