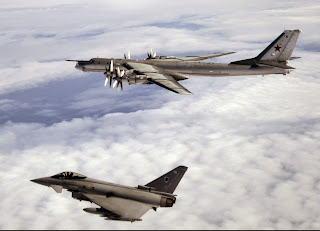 MSN News is reporting that two Russian bombers flew over the English Channel, forcing civilian aircraft to be diverted. British Typhoon fighter jets were scrambled on Wednesday when two Russian TU-95 'Bear' long-range bombers flew close to UK airspace. ISIS does not concern me but this does. It represents a war game yet war is not a game.

Russia does the same thing to Canada over the arctic to see what we will do. That is not a game, it is an act of war. This is why Canada needs an Iron Dome like Israel has to fire missiles at bombers entering our air space. This is why Canada needs jets that work in the arctic like the Boeing super hornet not Harpers insider trading jets that don't work in the arctic. The balance of power preserves peace. Fiscal responsibility preserves civil liberty. 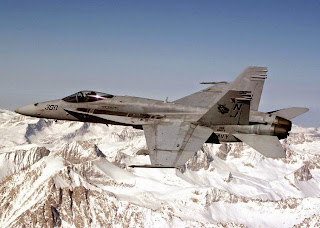 "The world is very different now. For man holds in his mortal hands the power to abolish all forms of human poverty and all forms of human life. And yet the same revolutionary beliefs for which our forebears fought are still at issue around the globe—the belief that the rights of man come not from the generosity of the state, but from the hand of God."

"We dare not forget today that we are the heirs of that first revolution. Let the word go forth from this time and place, to friend and foe alike, that the torch has been passed to a new generation of Americans—born in this century, tempered by war, disciplined by a hard and bitter peace, proud of our ancient heritage—and unwilling to witness or permit the slow undoing of those human rights to which this Nation has always been committed, and to which we are committed today at home and around the world."

"Let every nation know, whether it wishes us well or ill, that we shall pay any price, bear any burden, meet any hardship, support any friend, oppose any foe, in order to assure the survival and the success of liberty. This much we pledge—and more..."