Rising above hate and intolerance

Martin Luther King was a great man who rose about hate and intolerance. Like the founding fathers of the Irish Proclamation, he put the dream on paper and sealed that dream with his own blood. One of my favorite quotes from Martin Luther King is "I've seen too much hate to want to hate and every time I see it I say to my self hate is too great a burden to bear." Indeed it is.

They say the first casualty of war is the truth. In addition to planning false flag attacks the intelligence community is actively involved in public disinformation campaigns all over the Internet. MI 6 even sent out false press releases to the media lying abut Iraq's Weapons of Mass Destruction to sell the invasion of Iraq to the public. The British Weapons inspector who blew the whistle on the false campaign ended up dead of yet another suspicious suicide.

When the Intelligence community bombards the press with Islamophobia, that is no different than Hitler's anti Semitism. It is our moral duty to oppose hate and intolerance. Canada used to be known for its Peacekeeping. Harper killed that tradition by bring us into the oil wars and the desecration and assassination of Moammar Gadhafi. In contrast, Lester Pearson won a Noble Peace prize for his peace keeping efforts. Let's hope Justin Trudeau returns us to that proud era without bankrupting us with irresponsible debt.

Ireland is known for it's Catholic / Protestant conflict. It's really about being part of England or being separate from England but religion has worked it's way into the conflict because most of the Protestants in Northern Ireland were planted there by the British many generations previous. Consequently, many see it as a religious conflict when it's really not. The Irish Proclamation that came from the Easter rising in 1916, guaranteed religious freedom.

The Irish Proclamation declares: "The Republic guarantees religious and civil liberty, equal rights and equal opportunities to all its citizens, and declares its resolve to pursue the happiness and prosperity of the whole nation and of all its parts, cherishing all of the children of the nation equally, and oblivious of the differences carefully fostered by an alien Government, which have divided a minority from the majority in the past."

I'll tell you a couple of true stories about Syrian refugees in western Canada that I know are true because I saw them myself. Several weeks ago I was at the mall and saw a group of Muslim woman outside wearing hijabs all hovering around someone wearing a Red Cross vest. The first thing that came to mind was concern that someone had thrown a bottle at them and the red cross worker was administering first aid. I walked over to make sure everything was OK.

When I got close I saw the Red cross worker wasn't administering first aid, they were explaining something to them in arabic. There was a caucasian woman with them also wearing a Red cross vest and I asked her if the group was lost and needed directions. She said no, the other volunteer is explaining how the bus system works. I see I said. Where are they from? Syria she answered.

My eyes lit up, my hands raised in the air and in a loud voice I said Ah, Welcome! One of the ladies was holding a little boy on her hip. A soon as I said welcome the little boy and all the woman instantly repeated what I said in a loud voice and said Welcome! It was probably one of the first english words that little boy had ever learned. He was adorable.

A few days later a Syrian family moved in right next door. Their kids are absolutely adorable. There's two little boys and two little girls. At first they were a bit shy but I would smile and wave and they would smile and wave back over and over again. When my daughter would see them they would peek over the fence with big smiles and say Hi! over and over again. She was thrilled. It's wonderful to see young children having fun playing like all children should. How on earth can anyone hate on these adorable young children?

A couple weeks ago I was snowshoeing on Seymour and there were several buses on the mountain with numerous families. I asked where they were from and one of the workers said they are Syrian Refugees. Awesome I said. Makes you proud to be from Vancouver. One of the mothers crouched down beside her son and picked up some snow in her had for your young child to feel. He was feeling snow for the first time. A very young child. It was wonderful to see.

The Syrian refugees have endured great hardships. We should go out of our way to make them feel welcome. If you hate on young children, what do you think that will teach them? One of my coworkers is from Belfast. He came to Canada when he was very young and vaguely remembers throwing rocks at the British army. Now he has no animosity towards the British at all.

Another coworker married an Irish girl. One of her family members met another Irish family on the bus who kept inquiring exactly where they were from as in which side of the street they lived on and what their political affiliation was. They kept dodging the question but the other party was persistent. Finally they said look, we left the troubles when we came here. We don't want any part of that any more. The same with the Syrian refugees. Give them a chance. Embrace them. Let them leave their troubles behind and start a new life like everyone else. Peace. 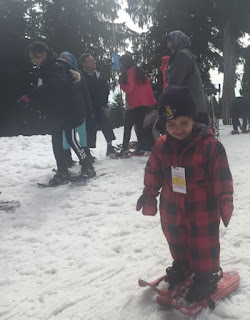