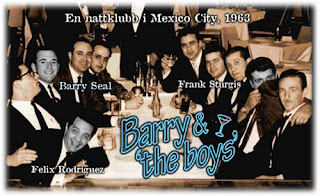 Speaking of Lee Harvey Oswald, I just watched a strange show on Netflix called Killing Oswald. His former ties to the CIA were indeed bizarre. After Vetoing Operation Northwoods, Castro didn't have a motive to assassinate Kennedy, Allen Dulles did.

The Daily Mail reported that "Former CIA director Allen Dulles ordered JFK's assassination because he was a threat to national security, a new book has claimed. Journalist David Talbot insists the head of the most potent agency during the Cold War wanted the former president removed for the good of the country." Big surprise. Allen Dulles was as dirty as they get. He was the one that proposed Operation Northwoods which Kennedy vetoed.

After Kennedy was assassinated, Lyndon B. Johnson ordered the attack on the USS Liberty.

The top picture is of Barry Seal and Felix Rodriguez with members of Operation 40 which Allen Dulles created. Wikipedia claims it was disbanded in 1970 due to allegations that an aircraft that was carrying cocaine and heroin in support of the group crashed in California. As we know, Barry Seal was a cocaine smuggling kingpin for the CIA out of Mena, Arkansas.

The bottom picture is from a previous post about a Youtube video showing that Kennedy was shot from the front not from the rear as the Warren Commission report claimed. Allen Dulles, the prime suspect in Kennedy's assassination was a member of the Warren Commission investigating his murder. In that video it clearly showed the body guards who were supposed to jump in and act as human shields in case someone was trying to shoot the president were ordered to pull back right before Kennedy was shot. Three times he was ordered to pull back and three times he questioned the order finally shrugging his shoulders expressing his confusion with the decision. 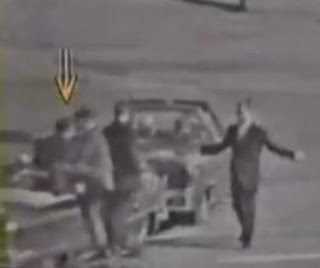 Although Kennedy vetoed Operation Northwoods he approved Operation Mongoose which was a covert attempt to overthrow Castro from within similar to Operation Ajax in Iran. Unfortunately, Allen Dulles recruited the assistance of the American Mafia. I kid you not. 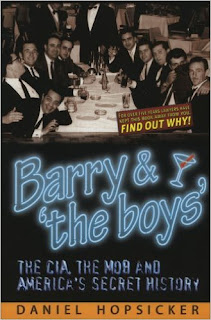 Trading with the Enemy

The Guardian reported that Allen Dulles helped hide the Bush family's business dealings with Nazi Germany until they finaly had assets seized under the the Trading with the Enemy Act. Supreme Court Justice Arthur Goldberg once stated that "The Dulles brothers were traitors." Some historians believe that Allen Dulles became head of the newly formed CIA in large part to cover up his treasonous behavior and that of his clients.