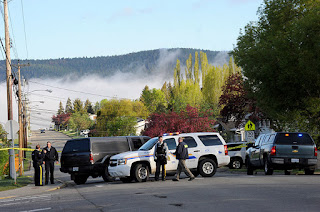 BC Local News is reporting that "Police have one suspect in custody and have lifted a lockdown order following a shooting incident at a residence in Williams Lake early Monday morning." It was quite a dramatic lockdown where the schools were closed after several shots were fired into a home. As a result they caught the suspect.

I don't think we could have a lockdown in Surrey every time there was a shooting. We wouldn't be able to get anything done. Congrats on the arrest. Castanet is reporting that shots were fired into a residence on early Sunday morning in Kamloops. Two men have been arrested. Both of whom are known to the police.

Big city drug violence moving into smaller rural communities. It's all about the greed.

Update: I'm not sure if this is related but the William Lake Tribune reported earlier this month that "Three suspects were arrested Friday in relation to the disturbance on Second Avenue Wednesday, March 30, evening in Williams Lake that left a 20-year-old dead." Neil Cory Billyboy, Lashway Andrew Lulua (also known also Lashway Merritt) and Charissa Dayne Destiney Sulin were all charged with break and enter with intent to commit an indictable offence, unlawful discharge of a firearm with intent to wound/disfigure and breach of probation order after a gang related home invasion on On March 30. "Twenty-year-old Indi Johnny died in hospital as a result of a gunshot wound following the incident. Johnny had been released from prison just one week prior to his death." The question is, what were acused murderes doing out on bail?