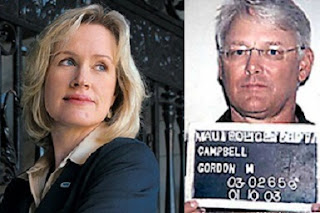 BC Hydro is the biggest neocon there is. It is a taxpayer fraud of epic proportions. The Vancouver Sun is reporting that "BC Hydro is borrowing hundreds of millions of dollars to meet the provincial government’s demands for an annual dividend. The Crown power corporation owes around $852 million to the government over the next three fiscal years in mandatory annual dividend payments. But it doesn’t have the cash, and so it will have to borrow the funds, said Energy Minister Bill Bennett. The contentious practice sees the monopoly energy company borrow money — which ratepayers will have to pay back in the future — so that it can meet government’s annual demand for a share of its profits. Bennett has admitted the practice is unsustainable, and will begin to be reduced by $100 million a year in 2018 until it is eliminated."

Remember Christy Clark's fudge it budget? She said she was going to balance the budget by extracting a dividend from BC Hydro. We knew that was a joke because BC Hydro has a ballooning debt it keeps deferring each year. If they hadn't privatized the power brokers they could have done this but now that they expropriated those public profits and handed them over to private profiteers, there is no more money to extract a dividend from. So here we see the magic of Christy Clark's fudge it budget. We are going to extract a dividend from BC Hydro who doesn't have one so we are going to lend BC Hydro the money to pay us the dividend. If it wasn't so criminal it would be laughable. Yet they keep doing it each year and no one says anything.

The root of the problem at BC Hydro is simple. Gordon Campbell privatized the power brokers that sell power to the public company at above market rates so his friends could exploit the public. This has created a massive ballooning debt that grows exponentially every year. It is the same kind of fraud that created the Greek financial crisis. What was once public money became private then disappeared. To make matters worse, Christy Clark appointed Jessica McDonald who was Gordon Campbell's former deputy minister to become CEO of BC Hydro. The scam continues so it does and tax payers keep getting ripped off in a very big way. 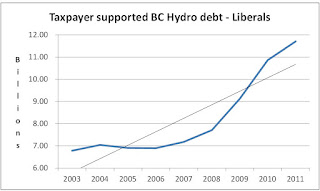