The Vancouver Province is reporting that "Postmedia Network Canada Corp.'s board has created a special committee to oversee a review of the media conglomerate's strategic options amid what CEO Paul Godfrey called "an unrelentingly challenging environment." The company reported another big loss in its second quarter Thursday."

Big loss is an understatement. It reported a $225.1-million loss in its second quarter.

This is of grave concern for everyone. How do we protect and preserve the sanctity of the press in such a competitive market? I'm not sure it's a competitive market so to speak because of all the corporate mergers. It's more of a challenging market because of human nature. Just like how the music industry tanked because of everyone downloading free music. We don't see too many HMV stores around that sell music CDs any more. Even video stores have disappeared partly because of downloading stolen movies.The bottomline is everyone wants something for nothing.

Just like television, revenue comes from advertising on commercials. Nobody likes commercials but nobody likes having to pay for TV either. They've even started running commercials at the previews in movie theatres now.

Yet it is easy for corporations to manipulate numbers one way or the other to suit their agenda. They want to cut jobs and expenses so they post an increase in losses to rationalize it. However, the increase in the loss resulted from an expenditure. They bought Sun Media from Quebecor in 2015. CBC is reporting that "the second-quarter net loss of $225.1 million, mainly due to an $187-million impairment charge." I'm not sure what the $187-million impairment charge was all about but it's certainly worth finding out.

Over all revenue increased from the purchase of Sun Media. CBC reported that "Revenues for the most recent quarter were $209.1 million, up from $145.4 million a year earlier, thanks to the company's acquisition of Sun Media from Quebecor in 2015." It's only when we factor out the increased revenue from Sun Media and factor in the expenditure that there apears to be a net loss when in reality there wasn't one at all. That's how they manipulate the numbers.

Why does any of this matter? Because like I keep saying, the freedom of the press is a sacred thing. Without it we become an uneducated mushroom patch always kept in the dark on important political issues that directly effect the amount of taxes we pay and the civil liberty we enjoy.Nobody likes politics but no one likes paying more taxes either and everyone likes civl liberty. I therefore submit that it's time for the public to become politically aware so they have more freedom and more money in their pocket. It's a catch 22. It's called social justice. 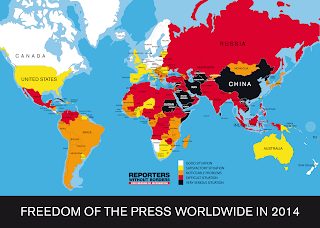 When we lose the freedom of speech, we lose our collective and individual freedom as well.

Kate Chruscicka: Requiem for a Dream.