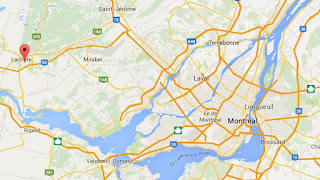 CTV is reporting that "A 41-year-old member of the Hells Angels is in serious but stable condition after being shot in the back while he was riding his motorcycle in Lachute. The man was riding in Bethany Rd. about 10:30 a.m. when multiple gun shots were heard, the Surete du Quebec confirms." CTV is reporting that the victim is a member of the Ontario Nomads Hells Angels.

Update: As a reader has pointed out the Montreal Gazette is reporting that a police source has confirmed the victim is Philippe Boudreau, the vice-president of the Ontario Nomads. This guy must be from Quebec. He's not some clown with shorts, sneakers and a full faced helmet. He's the real deal. Sh*ts gonna get real. 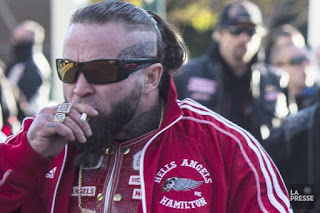 The Montreal Journal reported that Martin Bernatchez is the successor to Paul "Sasquatch" Porter at the head of the Ontario Hells Nomads chapter. Paul was RM but crossed over with other founding members when Mom Boucher went to prison.

The Root of the Conflict:

It doesn't take a brain surgeon to do the math and figure out a likely motive for the shooting and see the root of the new conflict. The Montreal Gazette is reporting that the Ontario Hells Angels are teaming up with the Rizzutos and are planning a comeback in Quebec after that massive police bust in SharQ. The thing is when Vito was in prison the Ontario Hells Angels teamed up with the Calabrians out of Hamilton who were at war with the Rizzutos. Now all of a sudden they've switched sides again. That's gotta upset their former business partners. Philippe Boudreau may well have been from Sudbury but the bottom rocker on the crest in the picture of him at the funeral said Hamilton. That was the base of the Calabrian resistance in Montreal.

I guess that's my primary beef. The Quebec Biker War had nothing to do with riding motorcycles. It was a war over a monopoly on the drug trade and when push comes to shove, L&R has absolutely nothing to do with it. It's all about making money. Allegiances change if there's more money to be made. For example, the Ontario Hells Angels haven't been known for their loyalty.

It was the Ontario Hells Angels that killed Bekim Zeneli from LHS because the Ontario Hells Angels wanted the Thompson drug trade and didn't want LHS and the Winnipeg HAs to get it. After they killed his friend they told Billy Bowden to suck it up or he'll be next. That's what started another drug war in Winnipeg and brought the Rock Machine back. Although it's clearly a new group since Vito helped broker a ceasefire between the HAs and the RM in Quebec. All the founding members of the Rock Machine joined the HAs.

Greg Wooley was supplying all the Crips in Montreal with drugs. That big meeting happened when he tried to convince the Bloods to sell drugs for the Hells Angels too. The leader of the Bo Gars as in Beau Garcons slapped him in the face and told him to f off. Shortly after that the HAs had him killed. Consequently there is no love for the HAs among the Bloods in Montreal. It will be interesting to see if the Bo Gars team up with the Calabrians and carve out their own territory independent of the HAs and Rizzutos. Time will tell. It always does.