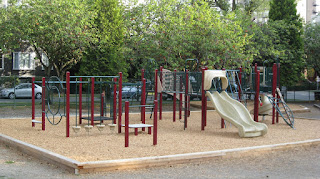 This is yet another example of how good intentions end up making a problem worse. The Vancouver Province is reporting that "Special needs teacher Mariya Astashenkava has a morning ritual when she arrives at Lord Roberts Annex elementary school in Vancouver’s West End. Before the kids can use the playground, Astashenkava and other staff comb the area looking for used hypodermic needles left behind by drug addicts who frequent Nelson Park at night.

"Some of the discarded needles are being found in a community garden adjacent to the school, which enrols students from kindergarten to Grade 3. On Sunday, one parent found seven used needles in the garden, and parents and staff think the problem is only going to get worse as the warm weather sets in and people use the park as an overnight campground."

The National Post is reporting that Finding used drug needles in public spaces has become the new normal for Vancouver. CBC is reporting that one woman said she found a single needle in the West End garden Saturday and removed it. But Sunday morning, when her family returned to work in the garden, they found seven new ones scattered around the planters. A few weeks ago she also found one jammed in the fence that separates the garden and the school, with the sharp end just feet from the school's playground equipment.

Back in the day, needle exchanges use to be exchanges. You turn in a used needle and get a free clean needle in return. It promoted turning used needles in. Somehow they did away with that requirement and just started handing out free needles which means the old needles are discarded everywhere. There is no incentive to return them any more.

My daughter has a lot of friends from other countries. Sometimes they ask her about a news program they saw that shocked them. They say, we saw a news report that in Canada they hand out free needles for addicts to do heroin. Is that true? They cannot comprehend it. They think it is insane. They are absolutely right. Even Snoop Dog was recently shocked by the insanity. Handing out free crack pipes is criminal. That Is NOT the New York model.