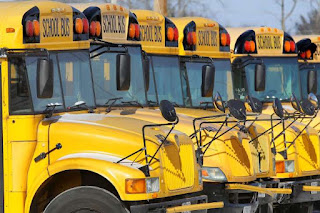 I'm not sure if this is a sick April Fools Day joke but the BBC claims it isn't. The Washington Post is reporting that "The CIA left 'explosive training material' under the hood of a Loudoun County school bus after a training exercise last week, a bus that was used to ferry elementary and high school students to and from school on Monday and Tuesday with the material still sitting in the engine compartment, according to the CIA and Loudoun County officials... It was during a routine inspection that a technician discovered the explosive material."

OK so the CIA had to release a press statement with an explanation after they were caught. It does look suspicious as hell given the documented reality of Operation Northwoods and Operation Galdio. However, the bus was located in Loudoun County which is in Virginia near the CIA headquarters not London England.

Is the CIA explanation plausible? Partly. Placing bomb materials in a school bus near their headquarters to see if trained dogs can detect it is plausible. The part about parts of the C-4 accidentally slipping down unnoticed into a lower part of the engine isn't. It's either gross negligence or absolute bullsh*t. It is unlikely the CIA would detonate a false flag attack so near their headquarters. Yet it is also just across the state line from the Whitehouse.

Another reason this is suspicious and concerning is because the new KGB pulled the same rationalization in Chechnya. In 1999, the Russian KGB allegedly conducted a wave of bombings in Russia in order to justify war against Chechnya and put Vladimir Putin into power. This was apparently a false flag attack wrongfully blamed on Chechen terrorists. September 22, 1999, locals in the regional town of Ryazan saw three men emerging from the cellars of a block of flats who later turned out to be FSB officers. When local police checked the cellars they found sacks of high explosive wired up to a detonator. The FSB later attempted to explain away the incident by claiming that the entire operation was a training exercise. Just like the CIA have now claimed.