Trust in the mainstream media continues to decline 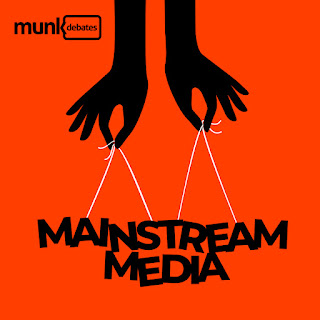 The Hub is reporitng that "Four high-profile journalists gathered in Toronto on Wednesday to debate the trustworthiness of the mainstream media and Canada’s trucker protests provided a ready-made case study. The results of the Munk Debate, which was held at Roy Thomson Hall, suggest there is a growing skepticism of the media and its ability to cover big issues."

What does that mean? It means the people saw how the media maliciously misrepresented the truckers convoy to Ottawa and everyone who supported it. It caused them to ask if the media lied about that, what else are they lying about. As a result, trust in the mainstream media continues to decline for just cause. The fake news has destroyed it's credibility by repeating false statements.

"Before the debate, 48 percent of the audience agreed with the resolution and, after the closing statements had been made, a whopping 67 percent agreed with the idea that the mainstream media is not to be trusted." That is significant but they have no one to blame but themselves.

The debate featured Substack author Matt Taibbi who argued against mainstream media. Now I recognize that name. He used to write for the Rolling Stone magazine and the articles he wrote were rock solid. However, the overall message of the Rolling Stone has become absurd. It's mainstream trash. Clearly the problem is not going to be solved by a bunk debate.

One of the previous debates concluded that "Be it resolved, the capitalist system is broken. It's time to try something different..." No it is not. Hence the conflict we now embrace. It's not a debate about Capitalism or Communism. It's a debate about freedom or slavery. We now see Capitalists funding Communism in the WEF. That is the problem. Corporate Communism destroys the free market. We need to protect the free market and we need to protect civil liberty by law.